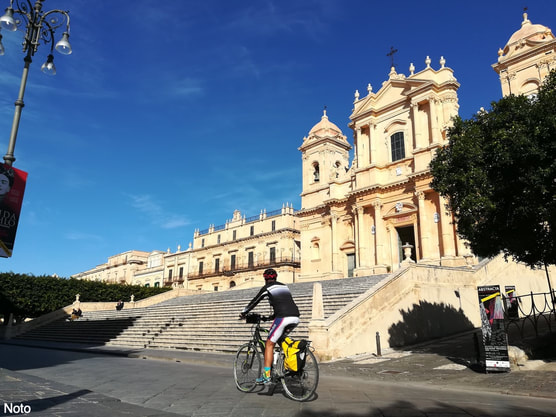 A bike tour in the Val di Noto means extraordinary views, variety of landscapes, picturesque villages, splendid Baroque towns and delicious food. That’s exactly what we experienced when we went to Sicily to test the routes!
The trip starts on the hills and finishes on the coast, passing through the area of the Late Baroque Towns of the Val di Noto, recognized as Unesco World Heritage site in 2002. A delightful mix of architectural treasures and natural beauties.
Cycling mainly on well-paved roads, we realized that the routes are perfect for both road and hybrid bikes, although if you are not very well trained, we would warmly suggest using e-bikes, given that you are in a mostly hilly area. 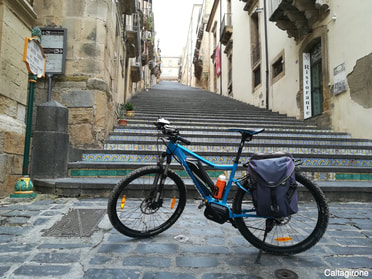 Caltagirone. Scalinata of Santa Maria del Monte
Piazza Armerina is a nice quiet place where to spend the afternoon strolling around its medieval old town. Its mix of Gothic and Baroque architecture is perfectly represented by the imposing Cathedral, which stands in the main square next to Palazzo Trigona.
But Piazza Armerina is mostly famous for the well-preserved Romain mosaics of Villa Romana del Casale, an archeological site about 4 km far from town. It takes 1 hour to do the whole tour of the site, so it’s possible to visit it in the afternoon or the following day before starting the ride to Caltagirone, as we did.
The route is quite short and, once you climb out of the old town, you go down for 10 km until you reach Mirabella Imbaccari, the only village you pass through on the first day. Then, down again in the valley, surrounded by the gentle hills of the Erean Mountains. The views are even greater as you go up a small road that leads you towards Caltagirone.
Here you can’t miss the magnificent staircase of Santa Maria del Monte and its 142 steps decorated with the typical Maiolica ceramics.

A view of Vizzini
Having a look at the profile of this route in the morning, we were impressed by its length and total ascent. But after we finished it, we were still more impressed by its beauty!
As you leave Caltagirone, you are soon struck by the the view of the Etna over the hills on the left. After 13 km, you meet the first town, Grammichele, notable for its hexagonal plan and square. Following a nice road for 15 km through fields and woods, the track arrives at the charming village of Vizzini. It’s a good moment for a break, since the first half of the ride is done.
In order to reach Palazzolo from here, you ride on a scenic route in the heart of the Hyblaean Mountains, passing through two pretty tiny villages, Buccheri and Buscemi. For 20 km you go up and down between 600 and 900 m upon the sea level, cycling on good roads and enjoying breathtaking views.
Once you leave Buscemi, there are only 10 km left. Going down to the valley, you can see Palazzolo on the top of a hill, so when the descent ends, there is just a final climb of 2 km to enter this lovely Baroque town. 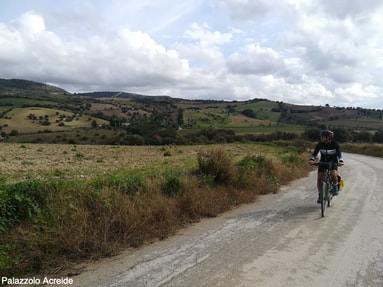 Leaving Palazzolo Acreide
This route is not long. So, if you have a look at Palazzolo’s town centre and its Unesco World Heritage churches the day before, in the morning you could consider a visit to the Greek theatre of Akrai.
The ride starts quite easily, going downhill for the first 10 km through the hilly countryside surrounding Palazzolo. The landscape is equally beautiful as you go up towards San Giacomo, a very small hamlet. The central part of the track is rather flat, being on a plateau, and at a certain point it is also possible to catch a glimpse of the sea far on the left.
After that, there is a beautiful downhill section where the road twists and turns around some hairpin bends. Here you get the first amazing views of Ragusa Superiore and Ragusa Ibla. Once in the valley, the route follows the river Irminio for a few kilometers before going round the hill up to the enchanting Ragusa Ibla, dominated by the cupola of the Duomo. 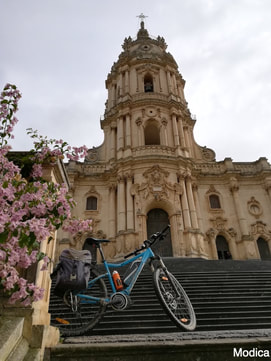 Modica. Duomo of San Giorgio
Leaving Ibla behind, you cycle across a valley and after 12 km you find Modica, where you can admire the stately Duomo of San Giorgio, a prominent example of the typical Baroque architecture of this area. Another thing you can’t miss here is tasting the famous and delicious chocolate of Modica. That’s a must!
Going out of Modica, you take a nice quiet road that goes gently downhill for 10 km and leads you to Scicli, another beautiful Baroque town which is part of the Unesco World Heritage. Then, the route continues on a panoramic road that goes up to a plateau characterized by a lot of carob trees. When there are about 15 km left, you pass from Cava d’Ispica, a 13 km long gorge where prehistoric necropolises, Christian catacombs and rupestrian caves attest the presence of man over the centuries.
After more than 10 km of descent, in order to enter Ispica, you ride uphill on a picturesque road in the rocks known as ‘La Barriera’, which goes through the opposite extremity of Cava d’Ispica. A perfect setting for the end of this stage! 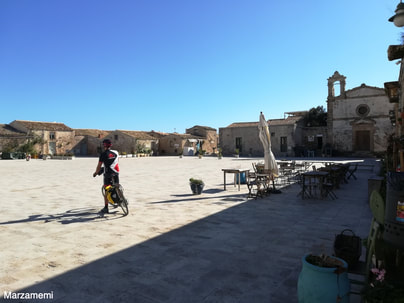 Marzamemi
Before you set off for Noto, make sure you have a look at the beautiful churches of Ispica, particularly the Basilica of Santa Maria Maggiore with its Loggiato del Sinatra.
The first 25 km separating Ispica from the coast are mainly ups and downs. You ride through a hilly landscape surrounded by vineyards and carob trees, and at some point you could be surprised to see the top of the Etna far on the left and the blue sea on the right.
Then a descent leads you to the old and picturesque fishing village of Marzamemi. Here it’s impossible not to be bewitched by the magic atmosphere of its lovely small square and the fishermen’s stone houses around.
After a quick stop in one of the several cafés, the ride continues along the natural reserve of Vendicari. Passing through this area, you also have the chance to visit the ‘Tonnara’, the place where the tuna fishing took place, and have a walk on the wonderful beaches nearby.
Then, in the last few kilometres, through lemon and orange trees, the road goes up to the wonderful town of Noto. 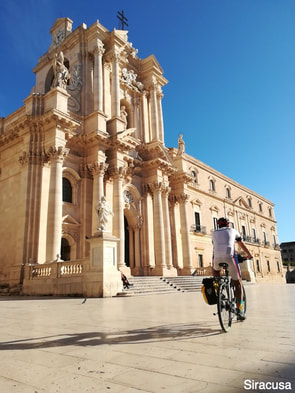 Siracusa. Duomo
Known as ‘The capital of Baroque’, Noto is really stunning. Walking down Corso Vittorio Emanuele, you are inevitably attracted by the astonishing beauty of the majestic churches and palaces. Especially impressive is also Via Nicolaci, an uphill lane notable for its superb 18th-century aristocratic palaces and their Baroque facades and balconies. This road is also popular because  it’s where a great event, the ‘Infiorata’, takes place towards the end of May.
The route starts in the gentle hills surrounding Noto, going down slowly towards the town of Avola, known for giving its name to one of the best Sicilian wines, the Nero d’Avola. Its large square, especially on sunny days, will tempt you with a brioche with granita or a cannolo. At least, it did that with us!
From Avola you continue the ride along the coast, passing by the amazing beaches of Fontane Bianche and Arenella, where you can decide to have a swim to enjoy the beautiful crystal sea. The track is short and flat, so you have time. Once you leave Arenella, there are only 10 km to reach the magnificent Siracusa and finish your tour. 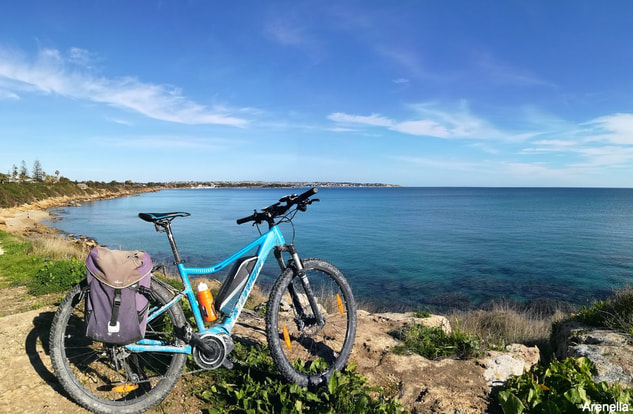