Sicily is the largest of the Italian islands, separated from the Continent by the Strait of Messina and surrounded by the Ionian, the Tyrrhenian and the Mediterranean Seas.
It is an island of enormous intensity, a concentrated distillation of history, architecture and gastronomic delights, where incandescent volcanoes light up the night skies, mountain ranges jostle for supremacy, and where the sea has sculpted a coastline of stunning variety and beauty.
Nature seems to have endowed all its wonders to this land: mountains, hills and above all the sea, with its incredible colors, its crystal-clear water and the beauty of its seabeds, in no way inferior to those of other seas.
It is one of the pearls of Southern Italy and can be discovered, understood and experienced through a series of itineraries dedicated to areas of interest ranging from nature to history and traditions.

Wherever you turn you will see evidence of Sicily’s 3,000 years of history as the strategic crossroads of Europe. Nowhere else have Phoenicians, Greeks, Romans, Arabs, Normans, French, Germans, Spanish, Italians, and even the British, left such an enormous collective legacy. The island is a vast open-air museum, a testament to nearly every Mediterranean civilisation of the past.

With its wonderful climate, Sicily is eminently visitable all the year round and each season has its own distinctive charm. There is always something to do, whether it be lounging on golden beaches, cycling through its peaceful countryside and beautiful baroque towns or visiting ancient archaeological sites. 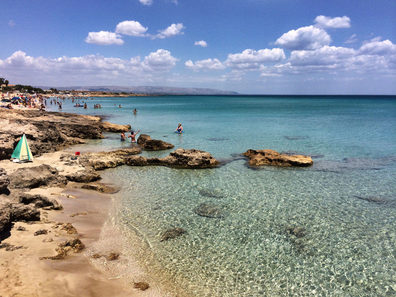 Marzamemi
Sicily is rich in UNESCO World Heritage Sites: Two other must-sees are the Late Baroque cities of the Noto Valley, and the Villa Romana del Casale in Piazza Armerina.
Situated in southeastern Sicily, Val di Noto (the Noto Valley) – with its eight gorgeous late-Baroque cities – became one of the Italian UNESCO World Heritage Sites in 2002. The eight cities are:  Caltagirone, Militello Val di Catania, Catania, Modica, Noto, Palazzolo, Ragusa and Scicli. These cities already existed during the Medieval Age, but were rebuilt (in part or entirely) after earthquake of 1693. Having followed the stylistic model predominant during the era, the cities’ architecture, urban plan and decorations constitute the culmination of one of the last periods of Baroque’s flourish in Europe.

Piazza Armerina, splendid art city woven into the heart of Sicily, boasts a slew of monuments that tell of its glorious past. Meanwhile, the apple of the citizens' eyes is the Villa Romana del Casale; originally the property of a powerful Roman family, it dates back to the 4th Century A.D.
This majestic Imperial villa, standing tall in the Province of Enna (perhaps the most "Roman" of places on the Island), is a magnificent rural abode, fascinating, above all, for its captivating mosaics, considered the most beautiful and best-preserved of their kind. The fruits of meticulous labor, these precise yet moving images make for a significant adornment to what remains of this extravagant residence – made a UNESCO World Heritage Site in 1997.

The exuberance and warmth of the island of Sicily is evident in its food as well, which tells of Sicilians' passion and care for good food and genuine flavors.
A wide array of appetizers to whet your appetite, from rice croquettes to cazzilli and crispeddi of Catania, before tasting rich first courses and fish or meat dishes. And finally, one should not pass up the famous Sicilian pastries, mainly prepared with ricotta cheese and almond paste. 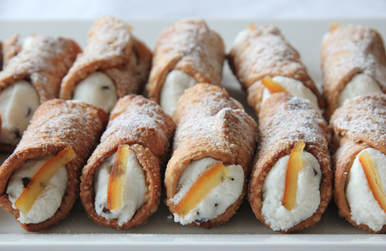